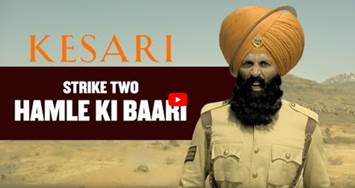 KESARI DIALOGUE PROMO: AKSHAY KUMAR IS ALL SET TO BATTLE IT OUT WITH AFGHAN INVADERS IN THIS TEASER

Akshay Kumar’s upcoming film Kesari symbolizes courage and bravery. He is all set to narrate the story of the Battle of Saragarhi.

The actor plays the role of military commander Havildar Ishar Singh who led a contingent of 21 Sikh soldiers who fought against 10,000 Afghan invaders. The makers have created positive buzz for the film by releasing the teaser, posters, and now, the dialogue promos as well.

Kesari is an unbelievable true story based on the Battle of Saragarhi, 1897. Touted as one of the bravest battles ever fought, 21 courageous Sikhs countered 10,000 invaders. These saffron clad warriors fought valiantly against all odds and changed the meaning of bravery. This Holi, celebrate the spirit of bravery & sacrifice with Kesari.