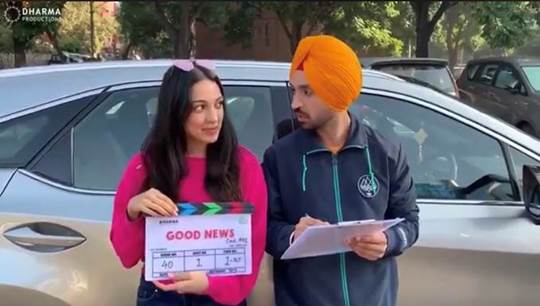 GOOD NEWS! The shoot has begun sans Akshay Kumar & Kareena Kapoor Khan but here is Diljit Dosanjh & Kiara Ali Advani kick-starting the journey by sending a shout-out to them.

Akshay Kumar has been making films based on patriotic and social themes for the last couple of years. Yes, there has been a Housefull 3 in between but the bulk of his choices have touched on issues like terrorism to open defecation. The megastar is all set to return to the genre which established him with Good News where he is paired with Kareena Kapoor Khan.
In the video clip, Kiara and Diljit stand on the side of a car with a placard in Kiara’s hand. Soon Diljit asks where all the members are. He has a checklist of names in his hands; as he takes the names of crew of the film, he also ticks the name off the register. Director Raj Mehta is spotted, but other members are still to join in.
Diljit reminds Kiara that Akshay Kumar doesn’t like people getting late. Finally, Diljit addresses Akshay (not in frame) and says that everyone is ready and in time and that he is being missed. Kiara chimes in, addressing Kareena and saying the same. They both announce that the shooting of ‘Good News’ has started. Akshay Kumar shared the ‘Good News’ on his Twitter account

Good News is a hilarious family drama where Akshay & Kareena and Diljit & Kiara play married couples trying for a baby. The film is being directed by Raj Mehta and is a Dharma Production.