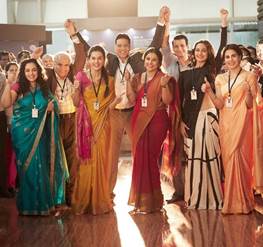 AKSHAY KUMAR CELEBRATES THE POWER OF WOMEN SCIENTISTS, SAYS THEY KNOW IT ALL!

Megastar Akshay Kumar takes it upon himself to inspire and entertain with his films. After tales of heroism that were untold such as in films ‘Airlift’, ‘Rustom’ and ‘Kesari’, extending his fem-force messaging in films such as Toilet Ek Prem Katha and Pad Man, his next, ‘Mission Mangal’, celebrates the power of women scientist and their achievements.

Akshay Kumar, who will be seen playing scientist Rakesh Dhawan in Mission Mangal, says that the film is the story of ISRO’s women scientists. The actor took to social media to share a picture of himself with his Mission Mangal army.
Along with the picture, the actor wrote, “Be it making a home or launching a successful space mission, women know it all! Celebrating the power of women scientists: #MissionMangal is their story!”

Mission Mangal is the incredible, true story of a scientist, Rakesh Dhawan (Akshay Kumar) and Tara Shinde (Vidya Balan) who lead a motley team of scientists who overcome their personal challenges and failures to serve as the brains behind one of the greatest missions in history: the launch of India’s first satellite to Mars, a stunning achievement that restored the nation’s confidence.
The film is a tale of ordinary people doing extraordinary things and inspiring generations to dream big and achieve the impossible.
The film has been directed by Jagan Shakti and produced by Fox Star Studios and is slated to release on India’s Independence Day on 15th of August 2019.