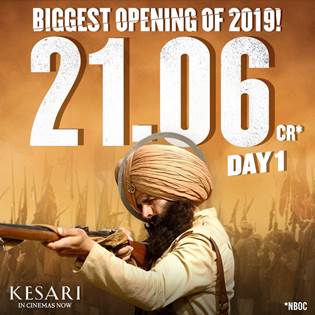 AKSHAY KUMAR ROARS AT THE BOX OFFICE. KESARI GETS HIGHEST OPENING OF 2019 WITH RS. 21 CRORE

Kesari Box Office Collection: Akshay Kumar’s film garnered a whopping Rs. 21 crore on its first day in theatres. Akshay Kumar treated his fans with Kesari on Holi and the film recorded a promising first day despite it being a festival day. Trade analyst Taran Adarsh tweeted to say that Kesari has turned out to be the film to have the highest opening day collections so far:

Reminding viewers of Kesari’s worldwide release, Akshay Kumar tweeted saying: “Kesari has released. So I’m hiding in the bushes. Catch me if you can in cinemas worldwide.”

Kesari is an unbelievable true story based on the Battle of Saragarhi, 1897. Touted as one of the bravest battles ever fought, 21 courageous Sikhs countered 10,000 invaders. These saffron clad warriors fought valiantly against all odds and changed the meaning of bravery. This Holi, celebrate the spirit of bravery & sacrifice with Kesari.

“It is very different from the original because it has got a lot of Indianness,” says Aahana Kumra on Call My Agent: Bollywood

Watch: Akshay Kumar and Rohit Shetty run away from Katrina Kaif as she records their ‘excitement’ for Sooryavanshi promotions

“No one should die on a film set. Period” – Priyanka Chopra reacts to prop gun misfire incident