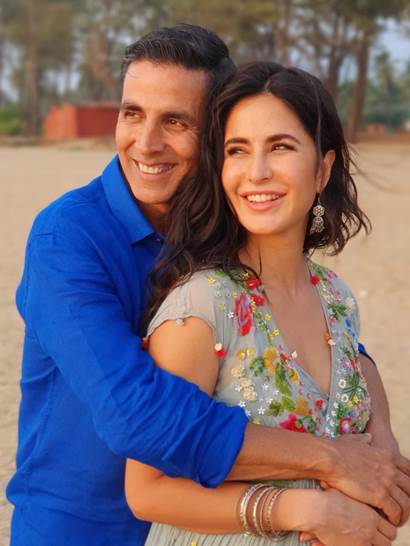 BEHIND THE SCENES: AKSHAY KUMAR SUMS UP HIS SHOOTING EXPERIENCE WITH KATRINA KAIF

Bollywood superstar Akshay Kumar who recently completed the shooting of his upcoming movie ‘Sooryavanshi’ took to Twitter to share a behind the scenes image from the sets. The image sees Akshay Kumar embracing his co-star Katrina Kaif by the sea as both the actors stare out into the sunset with smiles on their faces. Akshay Kumar looks dapper as usual in a blue shirt and Katrina can be seen wearing a floral ensemble. Akshay Kumar described working with Katrina Kaif through the picture and captioned the tweet saying ‘If I had to describe shooting with #KatrinaKaif in one picture, this would be it 🙂 #GoodVibesOnly #Sooryavanshi #BTS’. The pair are reuniting on screen after a gap of nearly 10 years and have previously featured in hit films such as Singh is King, Namastey London and Welcome.

Akshay Kumar has three exciting films lined up for 2020, the actor will be seen next in Rohit Shetty’s cop universe saga Sooryavanshi, followed by horror-comedy Laxmmi Bomb and he will be ending the year with historical drama Prithviraj based on the heroic Prithviraj Chauhan.

Ahmed Best Is Down to Return as Jar Jar Binks in...