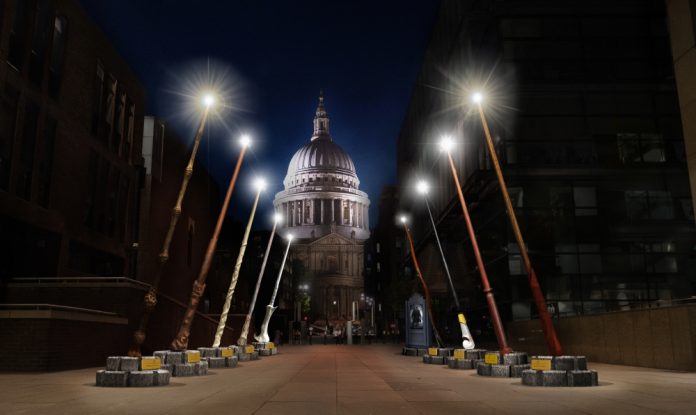 BREATHTAKING WAND INSTALLATION SET TO LIGHT UP LONDON IN CELEBRATION OF THE ALL-NEW WIZARDING WORLD ADVENTURE FANTASTIC BEASTS: THE CRIMES OF GRINDELWALD

LONDON, ENGLAND – September 20, 2018 – Next month, as excitement builds for the 16 November release of Warner Bros. Pictures’ highly anticipated new Wizarding World adventure Fantastic Beasts: The Crimes of Grindelwald, an installation of nine giant wands will illuminate the walkway between Millennium Bridge and St. Paul’s Cathedral in London to help raise awareness for J.K. Rowling’s charity Lumos, whose mission is to end the institutionalisation of children around the world.

Standing fifteen feet tall, the wands – bringing to life those belonging to some of the most beloved characters in the Harry Potter and Fantastic Beasts films – are the centrepiece of the new installation, Fantastic Beasts: Wizarding World Wands supporting Lumos. It is set to light up Peter’s Hill every night at 6:45pm from 18th October to 12th November.

Created in association with Lumos as part of the City of London Arts Initiative for public art, the
installation also kicks off a series of exciting activities for fans every “Wizarding Wednesday,” including wand training and a live performance of music from the Harry Potter and Fantastic Beasts films by a military marching band.

Josh Berger, President and Managing Director of Warner Bros. Entertainment UK, Eire & Spain, and President, Harry Potter Global Franchise Development said: “We are thrilled to partner with Lumos on this landmark installation, which is sure to delight fans and the tens of thousands of commuters and tourists passing through Peter’s Hill each day.

“London has played a huge role in the on-screen legacy of the Wizarding World, from King’s Cross Station to Millennium Bridge, not to mention the nearby Warner Bros. Studios Leavesden – which has housed countless iconic sets across all ten films and nearly two decades – providing a major boost to the UK film industry.

“Fantastic Beasts: Wizarding World Wands supporting Lumos is emblematic of this unique relationship, celebrating the magic of Harry Potter and Fantastic Beasts here in London while raising awareness for the vital work being done by Lumos on behalf of some of the world’s most vulnerable children.”

Further information will be available atwww.fantasticbeasts.co.uk/wandsready

About Fantastic Beasts: The Crimes of Grindelwald

At the end of the first film, the powerful Dark wizard Gellert Grindelwald (Depp) was captured by MACUSA (Magical Congress of the United States of America), with the help of Newt Scamander (Redmayne). But, making good on his threat, Grindelwald escaped custody and has set about gathering followers, most unsuspecting of his true agenda: to raise pure-blood wizards up to rule over all non-magical beings. In an effort to thwart Grindelwald’s plans, Albus Dumbledore (Law) enlists his former student Newt Scamander, who agrees to help, unaware of the dangers that lie ahead. Lines are drawn as love and loyalty are tested, even among the truest friends and family, in an increasingly divided wizarding world.

Fantastic Beasts: The Crimes of Grindelwald was directed by David Yates, from a screenplay by J.K. Rowling. The film is produced by David Heyman, J.K. Rowling, Steve Kloves and Lionel Wigram. Tim Lewis, Neil Blair, Rick Senat and Danny Cohen served as executive producers. The film will be distributed worldwide in 2D and 3D in select theatres and IMAX by Warner Bros. Pictures.

Fantastic Beasts: The Crimes of Grindelwald will be released in cinemas on 16th November.

At Lumos we are fighting for a world without orphanages and institutions. A world where families can stay together and children have the loving care and protection they need. Lumos is a force for change. We demonstrate the dramatic harm to healthy childhood development caused by institutionalisation and the overwhelming benefits of the alternative: community and family care. We tackle the root causes of family separation – poverty, trafficking and discrimination – and reunite families.

We speak up on behalf of the eight million children trapped in orphanages and other institutions worldwide to transform care, so every child can thrive in families and communities. 80% of these hidden children are not orphans and we prove that, with the right support, they can stay with their families. Named after the light-giving spell in Harry Potter, Lumos was founded by J.K. Rowling in 2005. To find out more, please visit www.wearelumos.org

About the City Arts Initiative

About the City of London Corporation

The City of London Corporation is the governing body of the Square Mile dedicated to a vibrant and thriving City, supporting a diverse and sustainable London within a globally-successful UK.www.cityoflondon.gov.uk