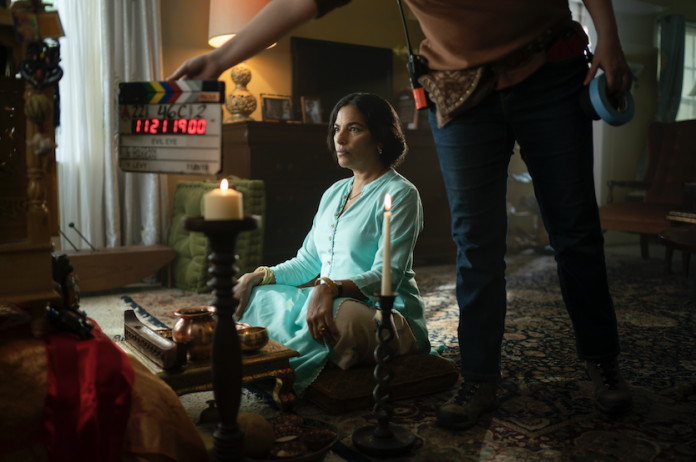 CO-DIRECTORS ON EVIL EYE: “ALTHOUGH OUR STORY TAKES PLACE IN A SUPERNATURAL CONTEXT, WE WANTED TO COMMENT ON THE CYCLE OF VIOLENCE THAT HAPPENS TO WOMEN IN THE REAL WORLD

A seemingly perfect romance turns into a nightmare when a mother becomes convinced her daughter’s new boyfriend has a dark connection to her own past. Based on the audiobook by writer Madhuri Shekar, Evil Eye is directed by award-winning filmmakers Elan and Rajeev Dassani and co-produced by Priyanka Chopra Jonas and Jason Blum (Get Out).

In the tradition of the best horror filmmakers, the Dassanis crafted innovative ways to frighten viewers using sound and image. “What’s great about making a film like Evil Eye is that you can play around with the genre elements,” says Elan. “You can shoot scenes entirely in silhouette, or add creepy audio effects, or you can create stylized flashbacks and use disorienting jump cuts to help tell the story. It puts the audience in a strange headspace where they’re not entirely sure what’s really happening at key moments.”

Along with the supernatural elements, Evil Eye also depicts everyday horrors to chilling effect. “Perhaps the most frightening thing that happens in the film is one character manipulating another,” says Elan. “The villain in the movie uses emotional tactics like gaslighting to control those around him. To me that’s much scarier than a ghost, or a stalker with a knife, because it happens in every city around the world. Right now there are people using insidious techniques to emotionally abuse women and keep them under their control. It could literally happen to you or someone you love.”

The filmmakers worked with experts in the field of emotional and physical trauma to ensure they treated the issue accurately. “Although our story takes place in a supernatural context, we wanted to comment on the cycle of violence that happens to women in the real world,” explains Rajeev. “So while preparing for the film we spoke to a number of people involved in helping abuse victims and assisting women who’ve gone through trauma.”