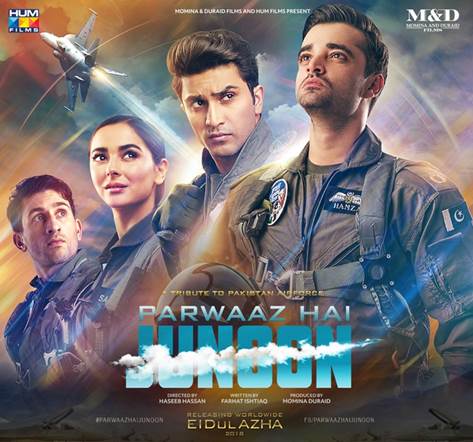 Parwaaz Hai Junoon (Soaring is Passion)is a tribute to the Pakistan Air Force (PAF), it is a feel good story based around the life of it’s cadets.The film takes our audiences through the events and experiences that take place at the PAF training academy. With a fresh and young ensemble of actors, this vibrant story focuses on their love of flying, love for our country and the bonding between a group of girls and boys who overcome various challenges to become Pakistan’s top notch fighter pilots. The film has been brought to the screen by the team behind the critically acclaimed film Bin Roye, producer Momina Duraid and author and screenwriter Farhat Ishtiaq

Set in a Pakistani Air Force Academy, the film follows Sania (Hania Amir), a young cadet who must fight against preconceived notions of gender roles to pursue her dream of becoming an ace pilot. Through her empowering journey, she will discover the human face of the Air Force, and what it truly means to fly for her country.

Director: Haseeb Hassan has done a fabulous job on showcasing a PAF cadet’s core values like integrity, honesty, courage, teamwork as well as the everyday comic mistakes and showing the human part of these cadets where they laugh, make jokes, face funny errors and show the lighter side of their daily lives at an Air force academy in Pakistan.The director has given us a unique tribute to Pakistan’s Air Force, who worked with the filmmakers on the creation of the film, Parwaaz Hai Junoon promises to depict the daily lives of cadets at a typical Air Force Academy, as they laugh, make mistakes and develop the core values of integrity, courage and honour. 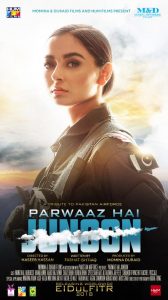 The music has been produced by Saad Sultan and the film marks the debut of Azaan Sami Khan as a music composer. The sound track has Bulleye and it is a good listen. Thaam Lo’ is a cute, catchy love song that’s sure to tug at heart strings. There is a wedding song called Naache Re which has definitely caught the attention of audiences worldwide. We have Main Urra is a zealous and powerful video highlights the message of patriotism and tribute to the Pakistani Air Force which brings a rush of adrenaline to the viewer.

Parwaaz Hai Junoon boasts a formidable cast of young talent, including sensation Hania Amir, who takes us to the skies and smashes the gender role sterotypes. She is fabulous in her role as the romantic lead as well as being the strong air force cadet. Pakistani superstar Hamza Ali Abbasi gives a heartfelt performance as the dashing hero and he is a joy to watch. Ahad Raza Mir in his big screen debut gives a sincere performance as a cadet going through the trials and tribulations which is emotional funny and very touching. Marina Khan was great in a brief cameo as was Kubra Khan. 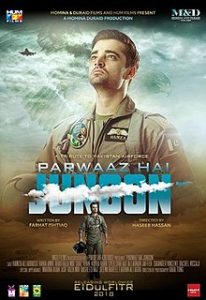 Parwaaz Hai Junoon depicts love, celebration, life, friendship and above all the passion to fight for the nation. The movie is distinct from the rom-com and patriotically themed movies that normally dominates the cinema industry of Pakistan. The best part of this film is that it is not against any country, The film has all the elements of being a success: we have the beautiful Hania Amir, the very good looking Hamza Ali Abbasi who is well-suited to his character as fighter pilot, there’s the spirit of nationalism that you can never go wrong with and again, there’s the sexiness associated with speed and uniforms that promises you’ll be thrilled to sit through the film..

Parwaaz Hai Junoon is filled with adrenaline, high-flying Top Gun style action and a strong ensemble of actors who excel in this heart warming action film with romance, humour and fabulous locations.

All put everything down and go and watch this exciting film.