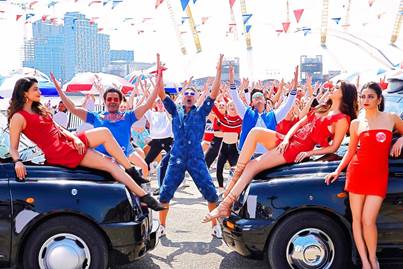 The first song from the epic period-comedy Housefull 4 is out now and is titled ‘Ek Chumma’.

Ek Chumma was entirely shot in the United Kingdom in five different locations spread throughout London and it’s outskirts. Some of the most iconic places in London like the ‘Tower Bridge’, East India Dock Basin, Myddleton Square Garden, Finsbury Square Garden, and Blenheim Place, were chosen for the song. A crew of over 750 people and 600 dancers were constantly working on a daily basis for the making of the song.

The song is choreographed by Farah Khan with music by Sohail Sen and lyrics by Sameer Anjaan. ‘Ek Chumma’ is sun by singers Sohail Sen, Altamash Faridi, & Jyotica Tangdi.

Housefull 4 sees the reunion of Nadiadwala Grandson Entertainment and Fox Star Studios after they delivered super hits like Judwaa 2 and Baaghi 2 and this year’s superhit comedy-college drama ‘Chhichhore’.

The film is the fourth instalment of Housefull franchise and is set to release worldwide ready for Diwali on 25th October.

EXCLUSIVE: "I thought it was interesting, I didn't think it can go to that level" – says Vipin Sharma on his chai sequence in...

Kriti Sanon Is In A Romantic Mood, Talks About Finding The...