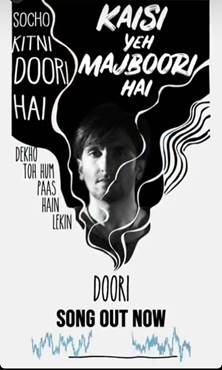 Ranveer Singh and Alia Bhatt’s Gully Boy has been making a powerful statement with its unique music. The latest song Doori is totally heart-breaking but immensely powerful at the same time.

Ever since the trailer of Gully Boy dropped, the fans have been buzzing about Ranveer Singh and his astounding portrayal of a rapper. While the makers have already revealed two songs of the film, including Apna Time Ayega and Mere Gully Mein, which are already a hit among fans, now, the latest song from the film has also just dropped and definitely strikes an emotional chord with music lovers.

Doori, written by Divine and Javed Akhtar, highlights the differences between people living in the same city and how they are distanced despite being so close. In the film, the song comes through a rapper from the slums of Mumbai who fights against all odds to become successful in the world of hip-hop. He contests against ‘elitist’ rappers to become successful and prove his mettle. Doori will compel you to think about the contrasting facets of society.

Along with Ranveer Singh, the movie also stars Alia Bhatt and Kalki Koechlin in pivotal roles.

Directed by Zoya Akhtar, produced by Excel Entertainment and Tiger Baby, Gully Boy is slated to release worldwide on the 14th of February 2019.