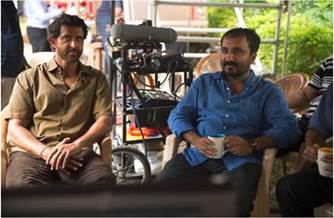 Superstar Hrithik Roshan has a legacy of delivering stellar hits with challenging and versatile roles. With Super 30, Hrithik has yet again proven this, with the trailer taking over the world and the fans awaiting its release. The actor is reprising the character of Anand Kumar on-screen who feels that Hrithik Roshan has imbibed his soul in his Super 30 character.
Talking about how Hrithik has done justice to his portrayal, Anand Kumar expresses, “From capturing the movements of my hands to the reflection of pain and struggle in his eyes, I was in awe after watching Hrithik in the trailer. I believe Hrithik has played me in the reel with utmost perfection and sincerity where he has imbibed my soul in his character. It felt like I was re-living my life on the screen”.

Like Hrithik’s fans, after receiving appreciation from Anand’s real students and alumni, even Anand Kumar is impressed with his portrayal and impactful dialogue delivery in the movie’s trailer which is receiving praises from all across- a testimony to how Hrithik has captured the true essence of the character.

Feeling even closer to the real students, Hrithik Roshan recently wished Anand Kumar’s Super 30 students who passed with flying colours in IIT entrance from his twitter handle. While 18 students cleared the IIT entrance, Hrithik has shown keen interest in personally meeting with the batch of Super 30 and wishing them in person. The actor has gotten in touch with Anand Kumar and is making sure, he meets them.

From the Bihari accent to the soul and nuances of his personality, Hrithik has completely imbibed the traits so well that everyone from the audience, the alumni of Anand Kumar’s real coaching centre and the critics alike are full of praises for the promising role that Hrithik had to show with the trailer.
A story of the true triumph of spirit, Hrithik will be reprising the role of a Mathematician, Anand Kumar who trains students for IIT-JEE in Bihar. The movie also features Mrunal Thakur alongside Hrithik in the trailer, which is being hailed as the “best trailer of the year”.

The first look of the film itself had created an immense buzz amongst the audience with Hrithik’s de-glam transformation winning appreciation from all across. The film is all set to hit theatres on 12th July.
Reliance Entertainment in association with HRX Films presents A Sajid Nadiadwala Film, A Phantom Production, directed by Vikas Bahl.