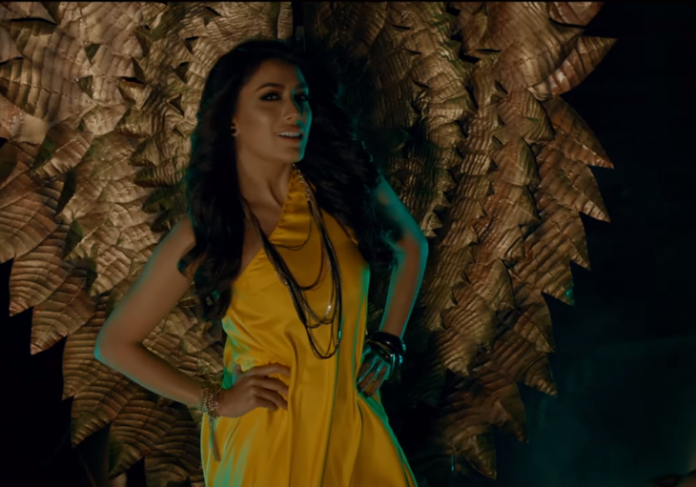 Check out Mehwish Hyatt who goes beyond animal life titles and this time she has become the ‘gangster guriya’ for Baaji. And oh boy she is on fire! The song is sung by famed Bollywood singer Sunidhi Chohan, Gangster Guriya has Mehwish flaunting her curls and leather-laden avatar. As the song suggests she is this rebellious star who is beyond reach with a devil-may-care attitude and Mehwish’s persona is right on point. However, we were expecting a more catchy tune. Gangster Guriya is visually captivating but the song has little chances of rerun value as you can hardly comprehend the words, let alone sing them.

Baaji is a thrilling and a dramatic tale set against the background of a fading Lollywood and the emergence of a new order in Pakistani cinema. The story focuses on a fading star, Shameera, who yearns to make a comeback and her relationship with a young girl, Neha, from inner city Lahore, who has big dreams of her own. The story takes a turn when a Pakistani American director who has just completed his maiden venture in Hollywood comes to Lahore to be a part of the revival of the local film industry. Searching for a classic face, he chooses Shameera for the film. And so begins the a high voltage story of desire, ambition and betrayal. Baaji takes the audiences on a journey filled with glamour, romance, scandal and intrigue. The film also pays a tribute to the classic social dramas of Pakistani cinema of the 1960s and the 1970s, while also finding inspiration from the golden era of Hollywood of the 1940s and 1950s.
Film is out on 28 June 2019

DP replies to Ananya’s pic with her

Then and now photos of Bollywood’s BFFs