Education-based films might not seem like profitable ventures but over the past few years, several such films have tasted enormous success like SUPER 30 [2019], CHHICHHORE [2019] and HICHKI [2018]. And the film that started this trend in recent times was HINDI MEDIUM [2017]. The film was a runaway success thanks to its message, realism, humour and performances. And now producer Dinesh Vijan is back with a second part of this franchise, titled ANGREZI MEDIUM. The film has been awaited keenly mainly because it’s a comeback of sorts for Irrfan Khan, after he was diagnosed with a neuroendocrine tumour. So does ANGREZI MEDIUM manage to entertain and impress as much as HINDI MEDIUM? Or does it fail to impress? Let’s analyse.

works well as per the situation. The rest of the songs are forgettable. Sachin-Jigar’s background score is however quite better.

Anil Mehta’s cinematography is appropriate. Smriti Chauhan’s costumes are real and the transformation of Radhika once she moves to London is effective. Bindiya Chhabria’s production design is quite good. A Sreekar Prasad’s editing is nothing great and suffers because of loopholes in the script.

On the whole, ANGREZI MEDIUM works only because of Irrfan Khan and Deepak Dobriyal’s chemistry and also due to some touching moments. At the box office, HINDI MEDIUM’s goodwill and Irrfan’s comeback will ensure decent footfalls for the movie over the weekend. 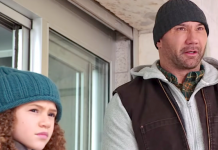