Check out the new clips from Robin Hood. We have This isd where we hit it and See who bites.
The time has nearly come to join the Hood. We are thrilled to share with you 3 new clips for Robin Hood which is released in cinemas November 21. The film is directed by Otto Bathurst (Peaky Blinders & Black Mirror) and stars Taron Egerton, Jamie Foxx, Ben Mendelsohn, Eve Hewson, Tim Minchin and Jamie Dornan.

Robin of Loxley (Taron Egerton) a war-hardened Crusader and his Moorish commander (Jamie Foxx) mount an audacious revolt against the corrupt English crown in a thrilling action-adventure packed with gritty battlefield exploits, mind-blowing fight choreography, and a timeless romance. 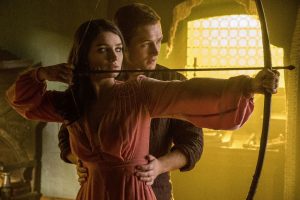