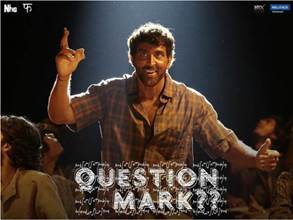 Hrithik Roshan starrer Super 30’s new song ‘Question Mark’ came out today. The superstar who has lent his voice to the song took to social media to announce its release.

In the song, Hrithik Roshan can be seen rapping the lines at first while teaching mathematics to his students with references from real-life and real locations. The actor is seen in his class of Super 30 students where the consistent ‘question mark’ is flashing and Hrithik is singing his way to explain it all to his students.

The song has been composed by music duo Ajay- Atul and the lyrics have been penned by Amitabh Bhattacharya. Much to the surprise of his fans, Hrithik Roshan has lent his voice to this foot-tapping track.

Super 30 is the story of Indian Maths wizard Anand Kumar who coaches 30 academically brilliant but underprivileged kids for India’s toughest engineering entrance exams, the IIT’s. The first look of the film itself had created immense buzz amongst the audience with Hrithik’s de-glam transformation winning appreciation from all across. The film is all set to hit theatres on 12th July.