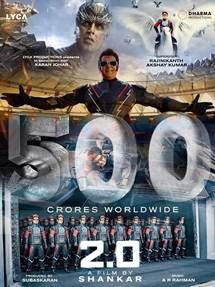 • 2.0 sets new benchmarks taking the number one spot at the international box office in its opening weekend from Fantastic Beasts: The Crimes of Grindelwald

• The film is set to break further records as the widest 3D release for a foreign film in history as it releases on 52,000 screens in China

• “2.0 works, and in a big, big way” – Roger Ebert.com, “One of the most entertaining experiences you can have at a cinema” – Polygon, “A visual delight” – The Economic Times

From the creators of the phenomenon that was Robot comes the highly anticipated sequel, 2.0, an action-packed extravaganza produced by Lyca Productions and directed by Shankar, one of Indian cinema’s most successful filmmakers. Superstar of South Indian cinema Rajinikanth returns in the leading role of Chitti, and is joined by Hindi screen megastar Akshay Kumar (Pad Man, Gold) and British actress Amy Jackson (Singh Is Bling, Supergirl).

2.0 has surpassed a record Rs 500 crore (USD $70,487,045) worldwide in its first week alone, taking this week’s number one spot at the international box office from Fantastic Beasts: The Crimes of Grindelwald, and becoming the second highest grossing Hindi film ever. 2.0 has also become Rajinikanth’s most successful Hindi film and is set to become Akshay Kumar’s highest earner. The film has been heralded as the new standard for India’s blockbusters with impressive effects, a captivating narrative and dynamic action sequences. The film is set to break further records as the widest 3D release for a foreign film in history as it heads to 52,000 screens in China with 40,000 screens in 3D.
Con’t/d…
…/2
Considered a magnum opus for director Shankar, the film combines action packed set pieces to rival Hollywood blockbusters with a thought-provoking environmental message to create a memorable film experience for the whole family, from young children to elderly film lovers. Shot entirely in 3D, 2.0 promises to grab audiences and bring them into the world of Chitti.
2.0 is a world class visual spectacle boasting some of the best special effects in Indian cinema. The film’s visual effects were handled by the award-winning effects studio Double Negative (Dunkirk, Fantastic Beasts: The Crimes of Grindelwald, Avengers: Infinity War), who have five BAFTAs and four Oscars to their credits for films such as Inception, Blade Runner 2049, and Interstellar. Award winning Hollywood VFX company Rhythm & Hues (The Golden Compass) also worked on key visual effects sequences in the film.

The film follows Professor Vaseegaran (Rajinikanth) years after the deactivation of Chitti (Rajinikanth) and his new humanoid robot Nila (Jackson) as they uncover a mysterious new element wreaks havoc across the city known as the fifth force. But when a connection arises between the fifth force and the sinister Professor Rajan (Kumar), Vaseegaran decides it is time to resurrect and upgrade Chitti to face the new threat.

Audiences across the globe have never been more excited for a big screen battle between Indian cinema greats Rajinikanth and Kumar. With Hollywood level special effects, spectacular visuals and a dynamic story with a message, 2.0 is moving ahead to become India’s biggest blockbuster.
Produced by Lyca Productions and directed by Shankar, 2.0 is in Cinemas nationwide in the UK in 2D and 3D.
Join the conversation!
#2Point0