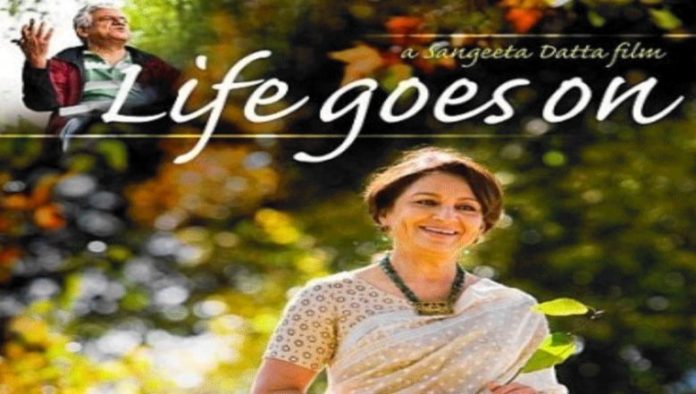 Tongues on Fire will be welcoming veteran of Indian cinema, Sharmila Tagore, to celebrate the award-winning actress’s 60 years on the silver screen with a screening of award-winning British film, Life Goes On (2009, Dir. Sangeeta Datta), as part of their South Asian Cinema curation at Wembley Park’s Summer on Screen season. Taking place on Sunday 7th July, 2.30pm, Tongues on Fire will welcome actress Tagore, director Sangeeta Datta and other cast and crew members to present the screening, which will also celebrate the life of late actor, director, writer and playwright Girish Karnad, who passed away on 10th June.

Known for her accomplished works in Hindi as well as Bengali cinema, Sharmila Tagore started her career in 1959 with acclaimed director Satyajit Ray in his cinematic masterpiece, Apu Sansar (The World Of Apu). Through her illustrious career, she has received two National Film Awards and two Filmfare Awards and was one of the most highest paid actresses in the 1970s era of Indian cinema as one of the industry’s foremost icons. A UNICEF Goodwill Ambassador, Tagore has previously led the Indian Film Censor Board and was one of the International Competition’s Jury Members at Cannes Film Festival 2009. In 2013, she was awarded the Padma Bhushan by the Government of India.

Featuring some of the most celebrated luminaries of Indian cinema, Sharmila Tagore, Girish Karnad and Om Puri, Life Goes On is a drama inspired by Shakespeare’s King Lear that explores the relations between a grief stricken father and his three daughters. Set in London, the family of Indian origin is part of the UK diaspora. With his wife’s sudden death, Sanjay is suddenly thrown into close proximity with his three daughters. The drama unfolds over five days from the day when Manju dies to the day of the funeral. Haunted by memories, grappling with the devastating loss, missing the mediating influence of his wife, Sanjay finds himself assessing and carving out new relations with his three daughters.

Tongues on Fire is presenting a specially curated selection of six films that celebrate South Asian cinema across multiple genres and languages as part of Wembley Park’s Summer on Screen season. The free, outdoor screenings from deck chair seating in Arena Square, set against the dramatic backdrop of The SSE Arena, Wembley, are taking place until 23rd July.