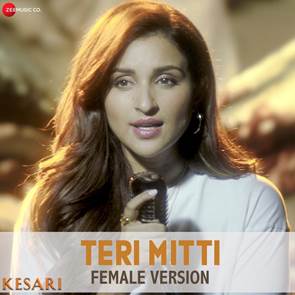 WATCH: KESARI’S TERI MITTI BY PARINEETI CHOPRA IS SOULFUL AND SPEAKS OF COURAGE

Actor Parineeti Chopra has crooned a special version of the song Teri Mitti for Kesari. The actor played a special role in the film which was spearheaded by megastar Akshay Kumar.

Kesari, might be in its fourth week, but the film’s fever refuses to slow down. Achieving a massive feat, the film has now entered Rs 150 crore at the India box office. After this grand success, Parineeti Chopra and Akshay Kumar decided to celebrate the success in their own special way and released the female version of Teri Mitti for their fans.

In the video, Parineeti Chopra is seen rendering her voice to the emotional track written by Manoj Muntashir. The song is about a soldier’s valour and how he wishes to be able to sacrifice his life for his soil one day.

Akshay Kumar shared the song on his social media account. He wrote “#TeriMitti gets a new soul with the beautiful voice of @ParineetiChopra!”

Kesari is based on the battle of Saragarhi fought between the British Indian army’s Sikh Regiment and Afghan tribesmen in September 1897. The British Indian contingent comprising 21 Sikh soldiers were attacked by around 10,000 invaders and decided to fight to the death, which is considered as one of history’s greatest last-stands.
Join the conversation
#Kesari
@akshaykumar

Sushmita Sen’s boyfriend Rohman Shawl dedicates his tattoo to her

EXCLUSIVE: These are Varun Dhawan and Sara Ali Khan’s favourite songs from Coolie No. 1

DP replies to Ananya’s pic with her

Dev Patel’s ‘The Personal History Of David Copperfield’ To Release In...